Two weeks ago, I attended the GIVEN Forum. It's a leadership conference for young adult women up to the age of 30. During the week, we prayed together and shared our faith. We heard talks from professional speakers and spent time getting to know each other, too. 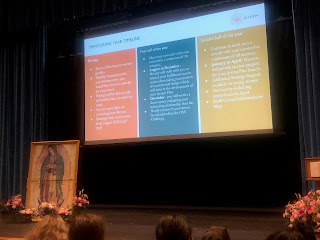 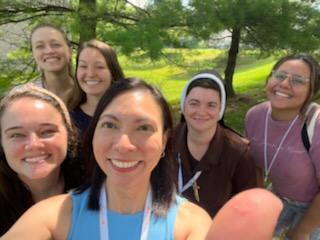 This is my small group. We met each day to discuss the talks we heard and the experiences we shared. 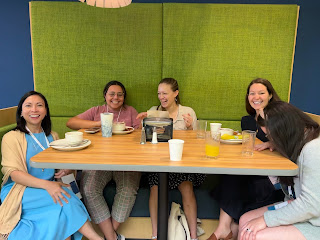 The other members of my small group, enjoying a good joke. 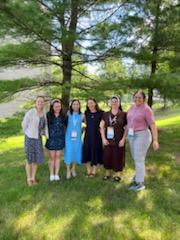 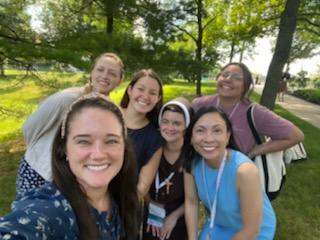 And another! What a great group! 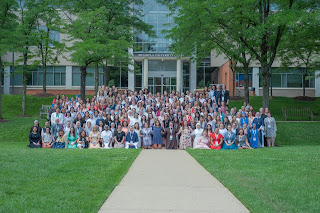 The group shot! There were sisters, lay women, consecrated laity, and the young women at the conference. 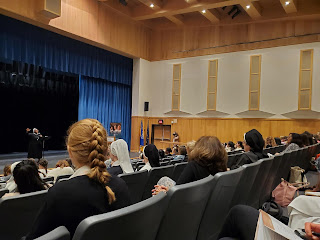 At one of the talks! 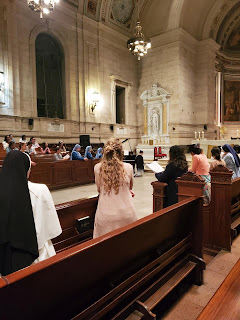 Here we are, gathered for prayer at Eucharistic Adoration.
Posted by Sister Grace Del Priore at 11:11 AM No comments:

News from the Felician Archive (straight from the archivist!)

Hello! I hope all's well for you in your part of the world. I've been pretty busy. You can probably tell, since it's been some time since I posted to this blog. My biggest task (my ministry, really) is the archive. As the archivist for the province, I'm responsible for the newly created Felician Archive in the Welcome Center for Madonna University in Livonia, Michigan.

I'm not doing this alone, though, and that's the biggest piece of news. With the support of the leadership of my community, and our Human Resources department, I have hired four Archive Assistants. They work a total of 22 hours a week, at an average of 3 hours a week each. Three of them are university students, two of which have taken library and archive classes. The fourth is a retired gentleman. They've been working since the end of March and are continuing until the end of May. I'll be rehiring in the fall.

The Archive Assistants have been helping me with a number of projects that involve processing documents into the archive system. The transition from working the archive to being a manager of workers has been an interesting one. It's my first time being a boss so it's definitely a shift! But I enjoy teaching them about archives and guiding them through the archive process. It's fulfilling to mentor others. It also frees me up to take a more big-picture view of the development of the new archive.

That's where the rest of the developments are found. I work with our IT manager to develop some technological aspects of the archive. I attend meetings with our IT manager and the MasterTrak company about a bar code scanning system for locating and organizing archive boxes. I'm active in the archive field, attending conferences and being active in archive groups. I also plan which projects each Archive Assistant will work on and buy office products that they need to do those tasks.

This summer, I'll balance archive tasks with travelling and other activities. I hope the bar code system will be ready before the fall, so those Archive Assistants can help set that up, and I plan on doing what I can to make that happen. Too, I look forward to putting more thought into the  Felician Archive Assistant program. I bought a book about how to have interns in the archive (Who knew such a book existed?!?) and want to get some good ideas from it.

Posted by Sister Grace Del Priore at 10:48 AM No comments:

Hello, all! I wrote this brief autobiography for a program I've joined (more on that later!) and wanted to share this with you.

I was born in 1980, the oldest of three daughters. My father, a podiatrist, was in medical school when I was young. We moved several times and my sisters and I were born in three different states: New Jersey, Pennsylvania, and California.

We always had pets in the house. My mom believes that it’s important to “save a life” so we got our cats and dogs at the local animal shelter. I definitely get my love of animals from Mom! She was also keen on us being involved in activities. I took horseback riding for several years and all kinds of dance classes. My favorite was tap, though I was never very good at it.

I joined religious life when I was 27. By then I had my Bachelors degree in French and my Masters in Elementary Education and had taught for five years. Having joined the Secular Franciscan Order in graduate school, it felt natural for me to choose a Franciscan community, the Felician Sisters.

For as long as I can remember, I’ve been an avid reader. I was thrilled when the Felicians sent me back to school for a Masters in Library and information Science. Right now I use that degree to be an archivist for my religious community but would also love to work in a library one day. I was always an enthusiastic student in school, interested in learning as much as I could. I consider myself a lifelong learner.

Posted by Sister Grace Del Priore at 2:18 PM No comments:

Parents and the Journey to Religious Life

I was, for the most part, raised in a single parent household, by my mom. My two sisters and I grew up with my mom, mostly in New Jersey.  I think she was generally confused by my interest in religion. She had been raised Catholic but in a number of ways had rejected the Church; we seldom attended Mass and she only voiced negative opinions about the Church. Despite this, I was drawn to religion at a young age. It was something I took initiative on: I went to Vacation Bible School with one friend and to church with another friend.

But I was also surrounded by secular values. I went to public school until college. My mom encouraged me to get a professional, competitive career where I could be independent and make good money.  Overall, I wasn’t raised to be a religious person. As I got older, these attitudes became a part of who I was. I didn’t become actively Catholic until college.

In other ways, though, my childhood prepared me for my future vocation. For instance, I always did well in school, and it was partially due to my mother’s support. She encouraged me to challenge myself and believe that I could do it. She instilled in me a confidence in myself and my abilities that has carried me through many difficult situations. This has helped me as a sister, and it makes me want to do the same for others.

My mother had a number of concerns. Some were helpful in guiding me to make better decisions. Others were more reflective of her needs.

First, she worried that I was rushing into this decision. When I was first discerning religious life, I was in my young 20s. She cautioned me not to make big decisions in my 20s, as women change a lot in that decade. This was based on her own experience: she got married in her young 20s and it didn’t end well. But it was also good advice. At the time, I had barely been done with school and hadn’t moved out on my own yet. I also hadn’t dated much. What if I did those things and realized that’s what I really wanted? A few years later, I revisited the idea of religious life, and I was ready to move forward on it.

I think she was afraid I was leaving her, like I wouldn’t be her daughter anymore. At one point, she told me I could do it IF I didn’t change my name—I remember her saying, “I gave you that name!”—and if I didn’t move out of our home state, New Jersey, when I became a religious sister. She said this early on, but by the time these things happened, she was accepting of them. I took the religious name Sister Grace Marie, instead of keeping the name Carla, when I made first vows and made my first of several moves out of state.

She also worried that she hadn’t given me a good example of marriage being positive and loving, that I was renouncing marriage because I had a negative association with it. She’s been divorced twice, and neither could be called amicable. I assured her that while her experiences with marriage couldn’t be called positive, it wasn’t why I wanted to become a sister.

I think what helped my mom the most was time. As time passed, she saw how happy I was and was happy for me. She realized that she wasn’t losing me to the Felicians. She also appreciated that I was settled into something, and she valued the opportunities I had as a sister. But all of this took time.

It also helped when religious life, particularly life in the convent, became less foreign to her. When she was exposed to my life with the sisters, she became more familiar with what my daily life was like. Meeting the sisters also helped. The Felicians did a good job with this, reaching out to her. They invited her to events and dinner in the convent. Before I became a postulant, my candidate director and soon-to-be postulant director came to our house for dinner. It helped my mother to meet and get to know the sisters.

My family, particularly my mom, had a lot of questions. They were not so much against my choice as they were confused by it. I think communities can help parents, families, and newcomers to religious life most by simply answering their questions throughout the discernment and formation process.

Posted by Sister Grace Del Priore at 10:15 AM No comments: 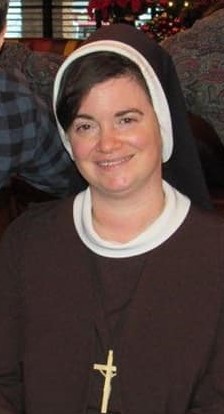 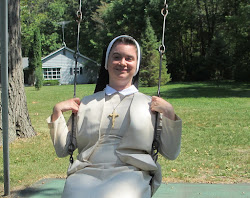 Getting into the swing of things before school starts.